I am sorry I was rude to you. I know you are up in the middle of the night somewhere in India trying to convince irate Canadians to switch to your idiotic home phone service, and you are just doing your job and following a script, but honestly. Do you have to call twice a week? In the middle of naptime? Please just stop.

Thank you,
An Irate Canadian.

The main tip-off that these are back-dated entries is my inability not to use 21:12 as the posting time.

The left-hand image is of a flower beside a river. The blue at the top of the picture is the sky. Only having one shade of blue is one of the limitations you have to work around when using a free drawing app on an MP3 player. Less of a limitation when you’re 4. The drawing on the right is a flower, and the sun. Or maybe it’s a sunflower. Heh. 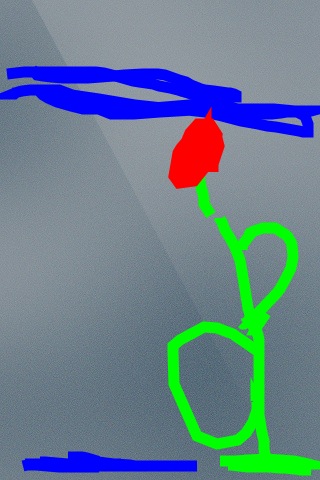 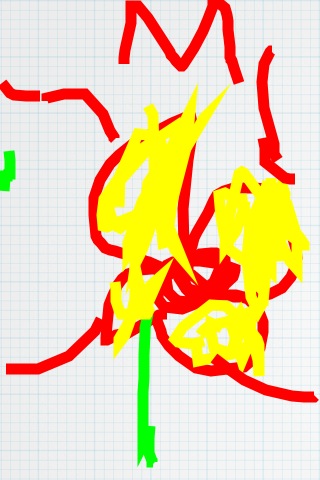 I’m retro-actively posting a few pictures, so if you think you haven’t seen these entries before, you’re probably right.

Below you can see a flower. A black flower. Or maybe it was a cloud. The blue stuff is rain, anyways, I know that. 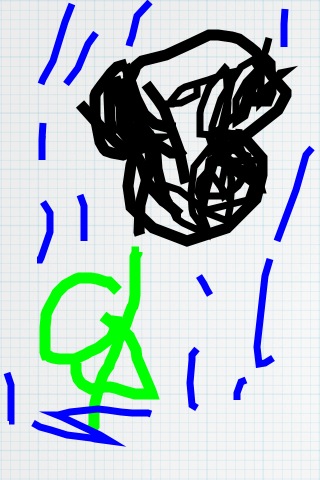 The best thing about this is that I never have to take the pictures down because the magnets are running out of strength. (Just a sun today, on the default Etch-a-Sketch background, instead of the note paper background of yesterday.) 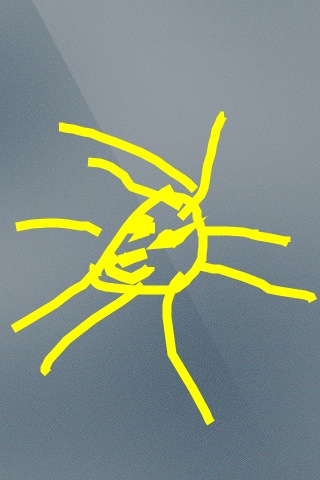 There’s a program called Sketches on my iTouch that Delphine likes to play with before she goes to sleep. I recently found out that I could email the drawings to myself, and so here are Delphine’s drawings from today. The one on the left is obviously a flower, with the sun in the sky. The one on the right is, uh, just pretty with all the colours mixed together, I think. 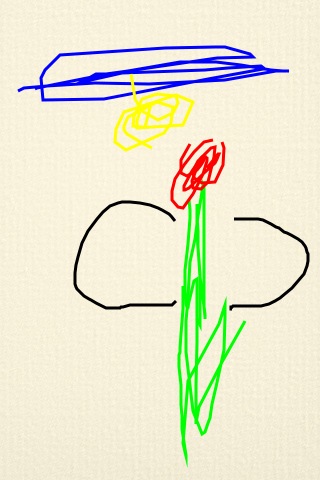 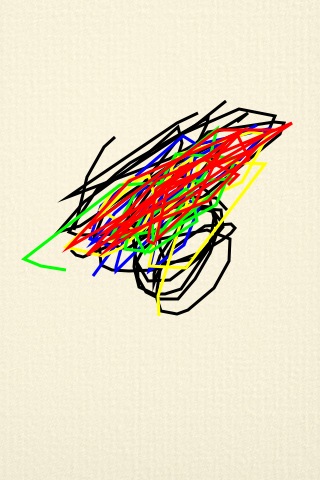 It’s really hard, and I’m finding that I have to kind of pull back from it for a while, or I’ld be totally bawling all the time I’m writing this.

She was cranky, rude, ill-tempered, and maybe a little mean (although never to me). But I did love her, and she really seemed to be getting worse, and not enjoying life anymore, and so I think that it is the right decision, hard though it is. Heck, just looking at her, sleeping on the sofa beside me last night, I could totally see that she wasn’t right. She was in pain, and wasn’t happy anymore, and didn’t have much of a prospect of getting better. (Certainly not while we weren’t willing to spend $1000’s of dollars treating cancer. Chemotherapy seems like a cruel thing to put a cat through.) She’s also the first pet I’ve ever had to put down. I was sad when the rats died, but this feels totally different, probably because we’re doing it by choice, instead of it happening on its own time. I guess I just figured that she would disappear one night, and I could delude myself into thinking that she found another home, but it’s probably better this way. More of a sense of closure, and all that...

I can also see why people believe in God and Heaven and stuff. I would kind of like to believe that Mimi has gone to some sort of better place, but I know in my heart that she hasn’t. That she’s just gone. And it sucks.

On a happier note, there are a lot of things I want to remember about her, both good and bad. The way her head smelled of ginger and cinnamon. The time she made Kathryn cry while she was babysitting for us. How loud and incessant her purr was. The way she would always hiss and swipe at Colin when we were all working in my living room. How soft she was under her chin. The way she let Amy (and only Amy) comfort her after spending a night at the vet. Heck, I even want to remember the way she would scratch her ass on the rug, and complain when I wanted to sit down on my couch. Damn stupid cat. I loved her.

Yeah, like I was done messing with my iTouch. Whatever.

I've been playing around a lot with the iTouch, and developing quite a few programs for it. The first one was by request, although I’m also finding it very useful. (And apparently a few other people are as well! Cool!) It’s called WifiToggle, and it’s a small app that simply toggles on and off your Wifi connection, so as to save batteries. The next thing I did was a port of the SpiderMonkey Javascript interpreter. It works, and it wasn’t that hard to get compiled and installed, which is really pretty cool when you stop to think about it.

The final thing I got working just tonight (which I was playing around with mostly to take my mind off of stuff. See tomorrow’s post for details), was a port of the Gambit Scheme interpreter. I know, Scheme is just like Javascript, only with an uglier syntax, but I still like it, and hopefully the lack of punctuation will make it easier to use on the iTouch. Heh.

Anyways, if you own an iPhone or iTouch, and have jailbroken it, be sure to add http://iphone.latte.ca/ to your list of Installer sources, and geek out!

I was pondering, a few weeks ago, how great my relationship with Blake is, how he respects me and treats me as equal in every way, and I wondered when and how I developed an intolerance for men who behave any differently. I cannot and do not abide any kind of sexist comments or behaviour, and I think that's partially why I have such a good relationship with Blake; because I would not give him the time of day if he weren't the kind of man who treats women as equal.

But where does my insistance on respect come from, I wondered? Definitely not from my parents' relationship, which is really just kind of weird. Then I realized it was from my relationship with my brother. When we were growing up Dave and I were best friends; in each others' pockets, confidantes and pals, and Dave never ever suggested I was less capable, less intelligent, less anything because I was a girl. I don't think it even occurred to him; he always had female friends and he's one of those men who simply treats women as human beings. That set the bar pretty high for every other man on the planet, and so while I don't have many male friends, the ones I do have are golden, because they have to pass the "Dave Brown Don't Treat Me Like A Idiot" test.

I was listening to my iPod Shuffle and it gave me "So Far Away From Me" by Dire Straits and it took me back to one of the happiest memories of my adolescence. I used to spend countless hours and countless evenings in my brother's room just hanging out; I played games on his computer, and I guess we must have talked, although I don't remember about what. I remember it as dark in his room, and warm, and full of that teenage boy funky smell which to this day I still rather like. We used to listen to Dire Straits and Elton John and The Eagles and Don Henley and Travelling Wilburys and all that old man music that Dave favoured at the time and has probably grown out of by now. (I haven't! Love me some old man music.) I don't remember how often I was in Dave's room or for how long, but looking back it seems like I was there all the time, just enjoying his company. How many teenage brothers and sisters can say they had a relationship like that?

So there are two things about my brother (known about these parts as Uncle Dave). It was his thirty-fourth birthday yesterday. Happy Birthday Dave!

I know, it's old, I'm not all hooked into the celebrity gossip.

Well, apparently I will never have time to actually blog, but there are three pages of new pictures (November, December, and Christmas) up at the pictures page, so let's hope a picture really is worth a thousand words.