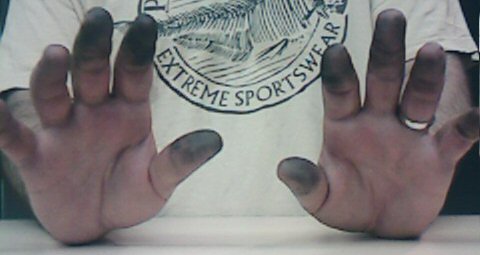 As I was riding to work today, just after crossing the railroad bridge, heading on to Summerhill, I noticed a man poking at his bicycle. I stopped, and asked if he needed a hand, and sure enough, he did. He seemed to have gotten his chain wedged around his Bottom bracket, in such a way that the arms of the Spider were attempting to push the top and bottom pieces of the chain through the chainstay. That obviously wasn’t working, so I grabbed my multitool, and attempted to use the largest Allen key to try to lever it out. When that too failed, I pulled out the one tool in my collection I’ve never used: The Chain Tool. After a few tries, I eventually got the chain apart, after which it was an not-so-easy matter of threading it out through the gap between the spider and the chainstay, re-threading it onto the chainring, and re-connecting it. As a final gesture of goodwill/parting gift, I gave him my last 2007 Bike Map. (Yeah, I know the link is to the 2006 page. They really have to update that sometime...) After all that, I got to the office 15 minutes late. (Well, 15 minutes later. I didn’t have a meeting or anything, and our core hours don’t start until 10:00.) But I’ve got to say, that was 15 minutes well spent, since it made the rest of my ride in seem extra-pleasant.