I did something new today. A while ago, I had bought a 10-speed Bianchi for $30 at a garage sale, with the intention of converting it into a fixed-gear/single-speed bike to tootle around on. Well, today, I took it down to Bikechain, and talked to Steve, who sent me on a merry goose chase picking up various parts. Once I had gotten a new wheel, tire, and tube and biked back to Biekchain, Steve and I put it on the bike, checked the alignment of the cogs and chain, and then I had to head out to buy a new rear cog, and a lock wheel…

Sadly, my bike didn’t have a functional rear wheel anymore, so I had to walk down to Urbane Cyclist to buy the cog and lock. I ended up with a 52:19 ratio, which is harder to start on than the gear ratio I use to start, but isn’t too bad, and doesn’t go as fast as the gear ratio I use to go fast, but again isn’t too bad. Given those two things, I figure it’s pretty close to perfect for my style and level of riding. When I got the cog and lock ring back to 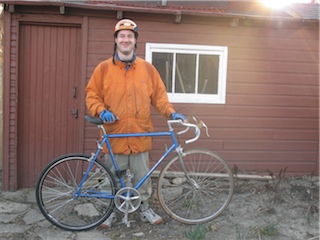 Bikechain, we put them on the new rear wheel, hooked everything up, ran into the obligatory problems, fixed them, and finally I was good to go, so I did! The first trip I took was a fairly short one, from U of T over to the Dark Horse Cafe at Queen and Spadina.

The second trip was from Queen and Spadina back home, which was a little longer. I learned a few things from that trip, but let me start off with something I didn’t learn. I had test-ridden a fixed gear bike before, so I had already been almost bumped off by trying to coast, and this time around I was expecting it. So, now on to the things I did learn. 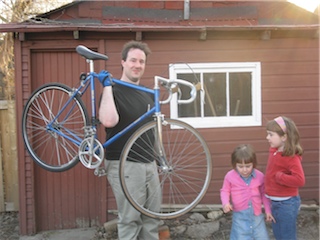 It’s fun. A lot of fun. I’m glad I finally got the conversion done, and I’m really looking forward to riding it.