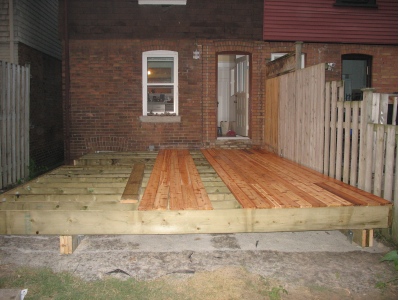 Wow, is that ever going quickly. At least, far quicker than I would have been able to do it. The last quarter of the last board in the big group on the right isn't screwed down yet, but I’m sure it’s only a matter of time.

Still to do, the stairs, the planters, and the garbage bin. We might not be getting a barbeque until the end of the summer, because a friend of the family is downsizing, and might give us her’s, but either way, I plan on having a party when the deck is done, with beer and margaritas and some sort of munchie thing. And of course you’re all invited! I’ll start planning it after the deck is actually done, and post details when they’re finalized.