(Don't forget to support the read-a-thon by donating to Books for Africa!)

I just finished On Writing by Stephen King. I read part of it on my friend Tanya's couch (oh, Esther), and a lot of it sitting on the back deck in the company of three blue jays, two black-capped chickadees, one chipmunk and a whole host of sparrows and squirrels.

I took a few breaks: to chat with a friend and with Delphine's piano teacher, to talk to Tanya (I was using her couch, after all), to make myself a sandwich, and to set up a science experiment for Cordelia.

I haven't been drinking water (although that's a good idea) but I'm going to make another cup of tea. Tea is like water, except tasty.

Delphine has been playing at her best friend's house for most of the day. Cordelia started the day watching TV, then did some science on the back deck, but is now growing restless because Blake is cleaning the kitchen and won't read to her. Blake's being a real trooper about being a book widower for a day.

I've been reading for two hours and forty-two minutes. I finished Moses in Egypt by Lynne Reid Banks, and am on page 68 of Stephen King's On Writing – he's just started working on Carrie.

So far I've read at the breakfast table, in the living room, in the bathroom while Cordelia was taking a bath, while walking Delphine to piano lessons and back, and on the piano teacher's porch.

Don't forget you can sponsor my readathon by donating to Books for Africa on my fund-raising page.

As I mentioned a couple of weeks ago, I signed up for Dewey's 24-Hour Read-a-Thon. I signed up, and then promptly forgot about it until earlier this week when I kinda vaguely thought, "Hey, isn't that soon?"

It's this weekend. Fortunately there's not much preparation required. I set up a fundraising page on the amazing FirstGiving site to raise money for Books for Africa. (I already raised $145!)

And I picked a stack of books to read: 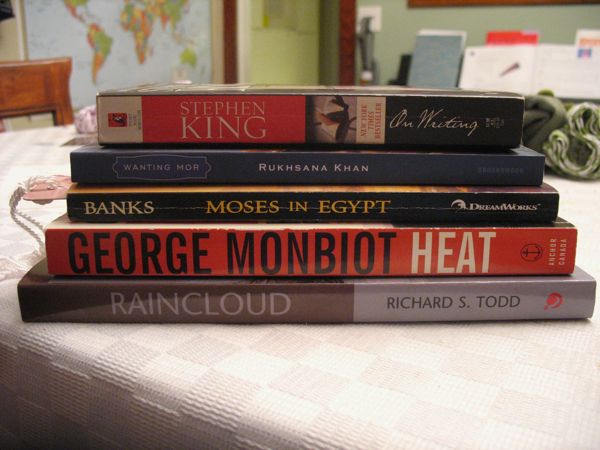 I'm sure I won't get through all those, but I wanted to give myself some variety so I can switch it up. (Blake suggested I just pick one Neal Stephenson epic for the whole 'thon. No.)

So Stephen King's On Writing because the last time I read it I came away feeling like I could be a writer, in some crazy dreamland when I can do wacky things like work with words and not hate my job – now that I'm living in that world I want to revisit Mr King's writing on writing.

Wanting Mor by Rukhsana Khan is a YA novel I bought with a gift card I got from Delphine's teacher last year for being class mom. It's about a girl in post-Taliban Afghanistan (does that even exist yet?) – that's all I know but (like most novel readers, I suppose) I love to learn about other lives and times and places through books.

Moses in Egypt by Lynne Reid Banks is based on the movie Prince of Egypt, one of my favourite animated movies, and the Book of Exodus. I've already started it and am enjoying it so far, although the prose doesn't have the fluid luminosity of the movie.

Heat by George Monbiot is a fairly old climate change book, but I feel I should read it to have a more complete understanding of the issue.

Raincloud by Richard S. Todd is a wildcard – it's by a work associate of my father-in-law. It's a mystery set in Ontario. Maybe it's awesome? I will report back.

I have a few other books on my TBR shelf if I get through/sick of all those. I'll be blogging or Facebooking or otherwise updating my status online as I go.

I'm not good at anything. Not officially, anyway. I used to be good at math, or at least that's what my Bachelor of Math degree claimed. I got a bunch of software jobs with my Bachelor of Math degree, and then I had some babies and stopped working, and I haven't had a software job for seven years. Do I miss it? No. Have I kept up with the technology? No. Am I interested in keeping up with the technology? Not really, no. Well… maybe a little bit. But not enough to be employable.

I'm good at writing. I'm good at editing. But I don't have any bits of paper to prove it, and that terrifies me. Every time I've considered changing careers I've always planned to first go to school and get a bit of paper, and then go ahead with the job-finding part. The thought of asking someone to hire me for something without the third-party validation of a degree makes me feel slightly ill.

On the other hand, I don't have the time or the money to go to school and get some kind of "I'm a Writer 4 Realz" certificate, and I do have a computer and a wee bit of natural talent. The only thing missing is the chutzpah to go out and tell people to hire me. Because I'm awesome.

Fortunately I already have one gig to be going on with, and another one lined up after that (assuming I don't utterly screw up the first one). Hopefully that will furnish my inner neurotic with enough validation to go beating the pavement in search of more work, which will beget more confidence, and so on.

Or maybe not – writers are notoriously insecure. Maybe this is the perfect career for me.

Here's a story from my mother.

She used to be in the Stoke-on-Trent Choral Society, and one year they did Bach's St Matthew Passion. There was a doctor on staff at the hospital (North Staffs Infirmary? – I have a very vague idea of the timelines of my mother's pre-me life) nicknamed "Deadly Earnest" who loved Bach – that might have been all he ever listened to. (He was from Leeds, my mother's from North Staffordshire, so you'll have to imagine the accents if you know them.) So she said to him,

"Are you going to come out and hear the St Matthew Passion, then?"

So he did come out and hear it, and afterwards she asked what he thought.

I know that's not a funny story or anything. But my mother tells millions of these little, pointless but telling slice-of-life stories (most of them for the fourth or fifth time) and I've just been letting them wash over me all my life. But it's starting to set in that, like fossil fuels, my mother's stories are a non-renewable resource and I had better start saving them.

Sometimes talking to Cordelia is exhausting because she likes to say things very thoroughly. So yesterday I was in the shower and she knocked on the door and said, "C'n I go pee?"

"But not out of da shower!"

"Just out of da water part of da shower!"

"But stay in da shower!"

Thomas is our cat. We got him – can it be? – in 1999. He was four then, so some rudimentary arithmetic suggests that he's 15 years old, which is about a hundred and fifty in cat years. Or people years – however that works. Anyway, he's old.

He's starting to show his age, in a variety of ways. He's very, very thin, and his fur is dull. He smells a bit peculiar. He has become strangely affectionate; he'll hang around when you're in the kitchen, stretching up and wrapping his arms around your legs. He also comes around when we're eating and reaches up to gently paw Delphine or I on the side. Today I picked him up and he settled uncomfortably on my lap for a few minutes – he wants to be near us but he's not sure how to enjoy it when it happens. He's never been a lap cat before.

At fifteen years, and so obviously fading, we know Thomas isn't going to be with us for long. I don't know how he's going to go. I suppose he'll get more and more infirm until he can't manage any more and we take him to the vet to have some of that alarmingly purple liquid injected into him. Or maybe we'll just come downstairs one morning and he'll be dead. I just hope it isn't messy or painful.

I totally forgot to do a blog post yesterday. I was aiming for one every day through September. I don't think anyone noticed though...

Yesterday was a full day – full of what, I'm not exactly sure. No one big thing.

I've been having trouble cramming enough work hours into my days day, so yesterday I was determined to devote most of my kid-free six hours to working, to catch up on my hours for this week. But then I realized I had to go grocery shopping after I dropped the girls off at school. Then I put away the groceries and by then it was past ten. Then I worked, had lunch, worked some more, did email and some chores because my eyes were crossing, worked some more and it was time to pick up the girls. Then they played while I puttered, or sorted through the vast piles of paperwork they come home with this time of year. At five I made dinner, at six we ate, then I put Cordelia to bed, then Delphine, then went out for a walk at eight. I got home at nine, filled in the paperwork, paid bills, and went to bed.

In the midst of all that I worked for two hours and 35 minutes. That's twenty-five minutes short of the three hours a day I would like to work, that on a day I had intended to work tons and catch up. I'm having more trouble than I thought I would squeezing three work hours from the day. And it's not screwing around, either, I swear. I spend maybe twenty minutes on Twitter, and I don't read blogs at all.

No, it's all the other stuff: housework, errands, School Council stuff, social stuff, and the endless administration of being a parent of middle-class 21st-century school-age children: forms to fill out, activities to research and sign up for, birthday parties to plan, and on and on. Hopefully it will taper off now that the initial rush of forms and signups is done.

And I will have to work on outsourcing, downsizing, postponing and streamlining, so I can fit in that three hours of work, else I can't even pay for Cordelia's daycare.

I just signed up for Dewey's 24-hour Read-a-Thon. It starts on October 9 at 8:00 am EST, and is just as it sounds: you read for 24 hours. Well, as much of 24 hours as you can stand, with breaks for eating and personal hygiene, as well as lots of online stuff like quizzes and things. I'm really looking for an excuse to just full-on binge on books. I have so many books on my TBR list – I'd love a chance to take a good bite out of it.

I'm going to try and hook this effort up to some charity so you (all two of you) and maybe my tweeps can sponsor me – to make it less self-indulgent, and inspire me through those sleepy hours. And I've already invited some friends over to join me in reading, with possible optional coffee and baked goods.